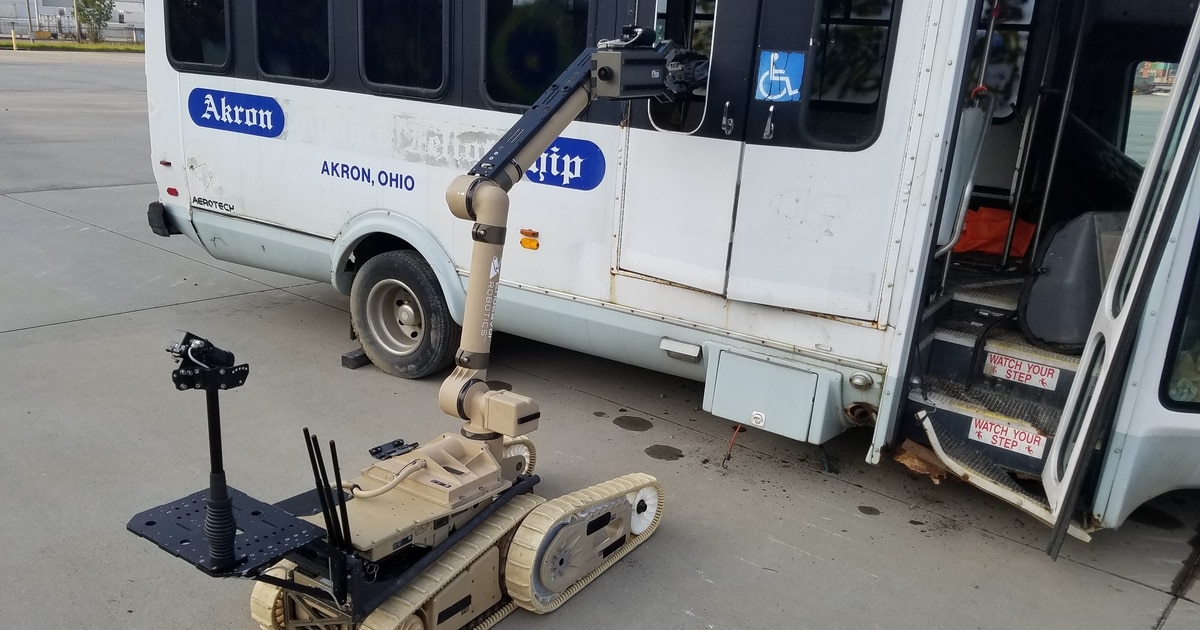 WASHINGTON — The U.S. Army’s heavy common ground robot has reached full-rate production, less than a year after FLIR won the contract to deliver the system, FLIR’s vice president in charge of unmanned ground systems told Defense News in an interview this month.

“We’ve progressed with the U.S. Army through all the milestones on the program and are now at full-rate production on the program. We’re building systems, we’re delivering them, there are systems out at Fort Leonard Wood right now going through training with troops and there are more systems in the pipeline to be delivered all the way through next year and further,” Tom Frost said.

“I think what’s remarkable is how quickly the Army was able to run a program to find a very capable, large [explosive ordnance disposal] robot and then get it out to troops as quickly as they did,” he added.

The service award FLIR an Other Transaction Authority type contract in November 2019 to provide its Kobra robot to serve as its Common Robotic System-Heavy — or CRS-H. The production contract will run for a period of five years and could be worth up to $109 million.

Under the current order, FLIR is delivering 34 systems, but the contract, should all options be exercised, has a ceiling of roughly 350 robots.

The Army wanted a system that weighs up to 700 pounds and can carry a variety of sensors and payloads that support various missions.

Part of the reason the Army could move so quickly, Frost said, is because Kobra is a commercial product that has been out in the market. But the system’s strength-to-weight ratio is also a selling point, Frost noted.

“The amount that it can lift with its arm, compared to the total weight of the system is very impressive. The mobility that it has, even though it’s such a big system and can do such heavy duty lifting and heavy duty tasks, is still nimble enough to climb up stairs and to climb into the back of an SUV for transport,” he said.

The robot can even climb over a jersey barrier due to a set of flippers on the base.

FLIR did have to make some tweaks to make the system appropriate for military use, Frost said, and worked on small changes based on soldier feedback.

For example, FLIR changed the height of the robot’s camera mast to improve perspective, and made it more robust to survive roll-overs. The company also upgraded the camera located on the gripper to HD-quality, in order to provide users with high-definition resolution on objects being manipulated.

The Army and FLIR continue to pursue different payloads for CRS-H. The Army required the robot to have an open architecture to allow for payloads to be integrated easily into the system.

The service is pursuing an enhanced robotics payload that would bring in new capabilities to put on top of the CRS-H platform, such as dual-arm manipulation and advanced camera systems.

These payloads will be awarded through separate contracts, Frost said. “We have a lot of technology that applies to those and we will compete,” he said, “but the Army tends to select best-in-class and because of the open architecture, we can marry those things together and they can be put on our platform.”

FLIR also provides the Army with a medium-sized unmanned ground vehicle — the Man Transportable Robotic System Increment II. FLIR is delivering the Centaur UGV for that program as well as supplying all of the other services with the same capability.

The company announced Monday that the Army, Air Force and Navy have together ordered more than 250 additional Centaur UGVs worth $32 million. Over the past year, FLIR has received roughly $97 million for more than 750 Centaur robots for EOD teams across all services.

The Air Force is interested in a CRS-H capability, according to solicitation posted in October to Beta.Sam.Gov, a federal contracting opportunities website.

The service wants a commercial system to meet EOD requirements that is highly mobile and equipped with a camera system and manipulator arm with a gripper. The robot should be able to operate in all weather, terrain and environments, have a minimum 800-meter, line-of-sight radio range, with a 3-hour runtime that can fit in a Base Response Vehicle or a Bomb Squad Emergency Response Vehicle, according to the solicitation.