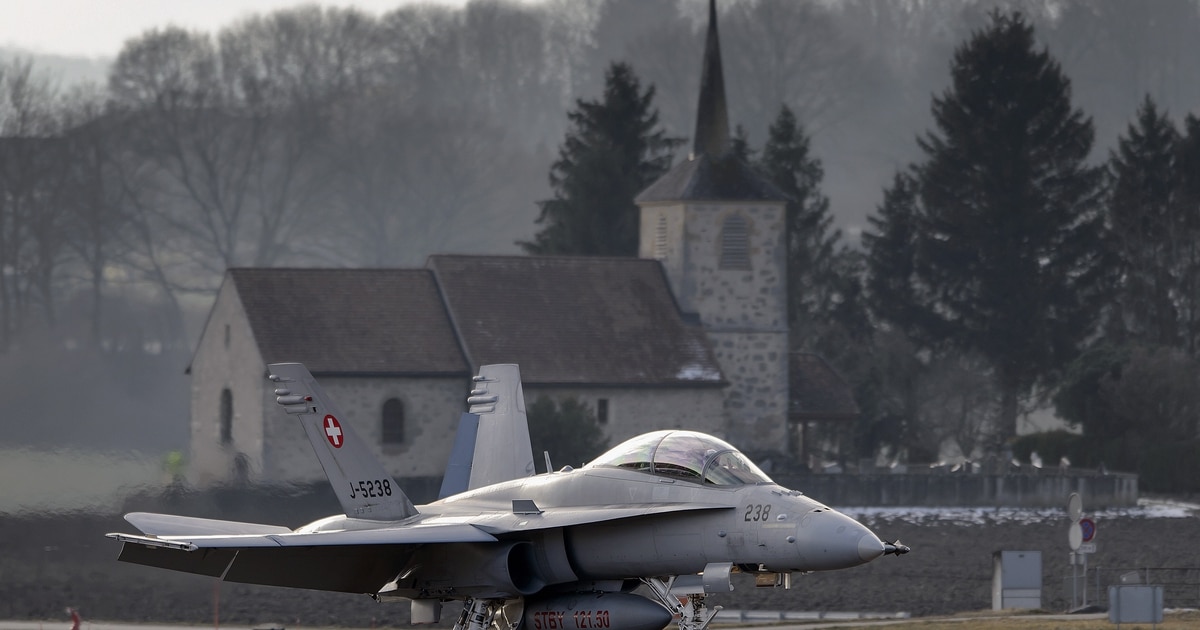 Nov. 18 was the deadline for the quartet of hopeful vendors, which also includes Boeing and Dassault, to deliver their vision — and price — for one of the largest procurement programs in Europe.

Switzerland is looking for somewhere between 36 and 40 new aircraft to police the country’s airspace. The degree of local industry participation is shaping up to be a major factor for the famously independence-minded Swiss.

Airbus got an assist from four Eurofighter operators — Germany, Spain, Italy and the U.K. — who sent their ambassadors in Switzerland to a Nov. 19 news conference to talk up the prospect of a grander industrial and political partnership that would follow a Eurofighter pick.

The Swiss are expected to make a decision in early summer 2021, following a referendum vote this September that narrowly greenlighted the budget.

The Airbus offer includes final assembly of all aircraft by way of a partner company in Switzerland, the details of which the company plans to announce in December.

Michael Flügger, Germany’s ambassador in Switzerland, touted the possibility of Eurofighter-based airspace-patrol cooperation along the Italy-Switzerland-Germany axis. In addition, he said, Switzerland joining the airplane’s user club would mean the country can “export” training flight noise to remote areas in the other partner countries.

Franz Posch, who heads the Airbus campaign in Switzerland, told reporters that the company’s plan to locally assemble all 40 of the notional aircraft would “more than fulfill” the offset requirements established by the Swiss government.

Lockheed Martin, with its F-35, also has high hopes for the Swiss competition, hoping to broaden the plane’s user base in Europe. The company’s offer includes a basic program of 36 jets, with options for an additional four aircraft, Mike Kelley, who leads the company’s F-35 efforts in Switzerland, said during a Nov. 19 roundtable with reporters.

While Switzerland would be able to purchase parts through the spares pool shared by all F-35 operators, the offer also contains a six-month deployed spares package — a separate pot of parts that would be managed by the Swiss government, which was necessary to meet Swiss autonomy requirements.

To meet requirements for industrial participation, Switzerland would have the opportunity to domestically produce about 400 canopies and transparencies for F-35 aircraft, and Lockheed would establish a European hub for the maintenance, repair and overhaul of F 35 canopies and transparencies in Switzerland. In addition, the country would take on certain F-35 engine and airframe sustainment projects focused on maintaining the Swiss Air Force’s operational autonomy, Kelley said.

Lockheed also plans to partner with Swiss industry to create a cyber center of excellence, which would prototype a unique data network for Switzerland and build a test bed that would allow Swiss companies to test cyber capabilities in a secure environment.

On top of those efforts, Lockheed is offering one last industrial participation opportunity to Switzerland. For an additional cost, Switzerland will be able to conduct the final assembly of four F-35 aircraft at existing RUAG facilities in Emmen, allowing the Swiss technicians that currently work on the country’s aging Hornet fleet to build a deeper knowledge of the aircraft’s design.

That option would add a “significant cost” to the total program, Kelley said, but could allow for overall savings throughout the life cycle of the program.

Boeing, meanwhile, has positioned its offer of an F-18 Super Hornet fleet as a logical extension of Switzerland’s existing F-18 infrastructure. “As an F/A-18 operator, Switzerland will have the option to reuse up to 60 percent of existing physical and intellectual infrastructure, making the transition to a Super Hornet easier and more cost effective over the life of the aircraft,” the company said in a statement.

The reference to cost comes after Swiss officials stressed that the fighter portion of the Air 2030 air defense modernization program includes a cost ceiling of 6 billion Swiss francs (U.S. $6.6 billion), with with an eye on potential price reductions along the way.

“Currently, Boeing is working with more than 100 current and new partners across Switzerland to identify the right opportunities for its New Fighter Aircraft industry plan,” the company said.

France’s Dassault, with its offer of the Rafale, is the only vendor keeping its cards close to its chest. Citing a commitment to confidentiality, a spokeswoman told Defense News the company had no plans to characterize its offer nor the “nature of the relationship” between the Swiss and French governments to that end.