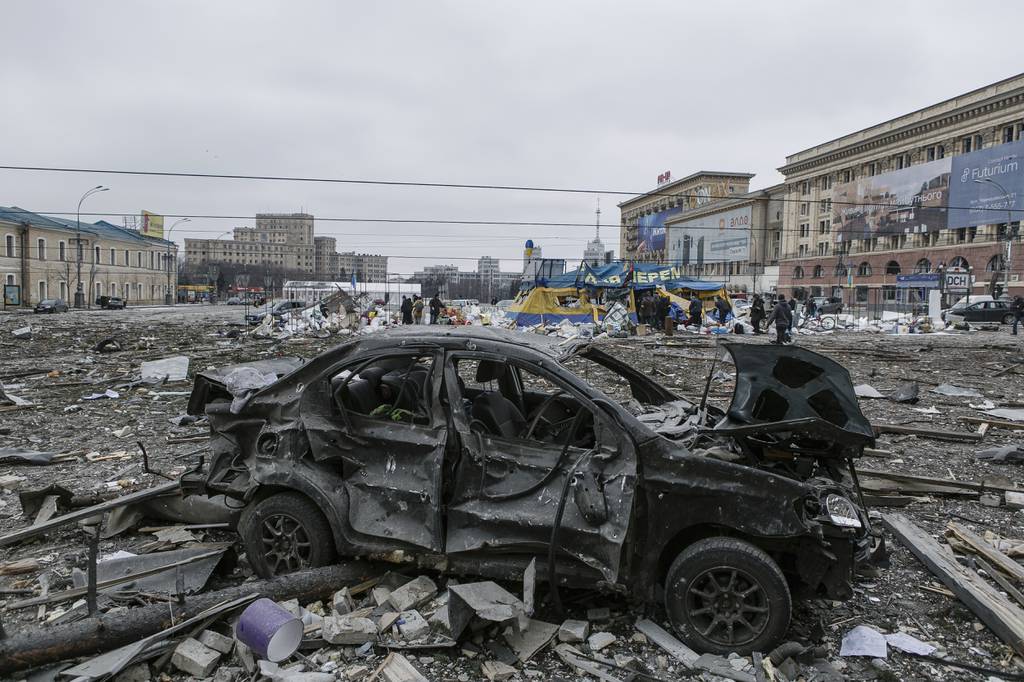 NATO Secretary General Jens Stoltenberg said Tuesday that European Union members will not lend fighter jets to the war in Ukraine, after days of mixed messages from officials across Europe.

“NATO allies provide different types of military support: material, anti-tank weapons, air defense systems and other types of military equipment for Ukraine, humanitarian aid and also financial support. But NATO is not to be part of the conflict,” he said in a joint appearance with Polish President Andrzej Duda at the country’s Łask Air Base.

The alliance “is not going to send the troops into Ukraine or move planes into Ukrainian airspace,” Stoltenberg added.

Sending jets into Ukrainian airspace — ones similar enough to Ukraine’s MiG-29 Fulcrum and Su-27 Flanker fighters — would amount to military interference in Russia’s invasion of the neighboring country, Duda added. Critics of the plan have suggested following through would make targets of Poland and other countries who could potentially donate aircraft to the cause.

Kevin Nieberg, a spokesperson for NATO’s Allied Air Command, declined to confirm the claims of jets on loan on Monday. The U.S. Air Force had “no plans so far” to send its own fighters to fill in for any NATO jets offered to Ukraine, he added.

“Poland and NATO allies are boosting their political and practical support to Ukraine as it continues to defend itself against Russia’s full-scale invasion,” Nieberg said.

A dizzying back-and-forth has unfolded on social media and in the press since Sunday, when Alexandre Krauss, a senior adviser to the EU Parliament, tweeted that European jets would arrive in Ukraine within an hour. That tweet is now deleted.

Josep Borrell, the EU’s head of security, then made comments over the weekend indicating a fighter transfer was in the works but waffled on who would fund it. On Monday, Politico cited an unnamed Ukrainian government official who said local pilots had arrived in Poland to begin “the process of taking control of fighter planes they expect to be donated.”

The publication then reported that the EU had walked back Borrell’s comments, saying no decision had been made on whether to send jets.

When such requests are approved, the EU’s military staff coordinate with member countries on any deliveries of arms, ammunition, guns, anti-tank weapons and air defense systems, Massrali added.

Bulgaria, Poland and Slovakia would respectively send 16, 28 and 12 MiG-29 jets, plus 14 Bulgarian Su-25s, the post claimed. It added that Ukrainian pilots could operate out of Polish airports if needed.

In addition to Poland’s refusal, the Slovakian government confirmed to Defense News on Tuesday it will not send fighters for Ukrainian pilots to use. Politico reported that Bulgarian officials have also ruled out the idea.

If such a transfer does eventually come to fruition, it could help replace Ukrainian planes lost in combat and offer more airframes for pilots on the ground to join the fight.

“The Ukraine Army has come a long way, but the Ukraine Air Force and the Ukraine Navy have not,” said Philip Breedlove, a retired four-star Air Force general who served as the service’s vice chief of staff, head of U.S. European Command and NATO’s supreme allied commander. He now works as a Europe expert with the Middle East Institute.

“They went into this needing help,” he said. “They’ve lost airplanes now, and they need more help.”

On the sixth day of the biggest ground war in Europe since World War II, military experts worry Russia may be ramping up its artillery and air bombardments to beat down the Ukrainian opposition.

The Associated Press reported Tuesday that Britain’s Defense Ministry noted an increase in airstrikes on populated urban areas in the past two days. Russian forces on Tuesday bombarded the central square in Kharkiv, Ukraine’s second-biggest city, as well as Kyiv’s main TV tower and the adjacent Babi Yar memorial. The site marks the execution of more than 33,000 Jews by Nazi Germany over two days in 1941.

The Russian military hasn’t been able to control Ukrainian airspace as anticipated by national security experts, though an unnamed U.S. defense official told AP the Russians still have a significant amount of untapped combat power to call on. Overall death tolls from the fighting remain unclear.

European and American fighters continue to patrol the skies over nearby NATO countries in hopes of deterring any enemy aircraft that try to cross into that territory.

Rachel Cohen joined Air Force Times as senior reporter in March 2021. Her work has appeared in Air Force Magazine, Inside Defense, Inside Health Policy, the Frederick News-Post (Md.), the Washington Post, and others.