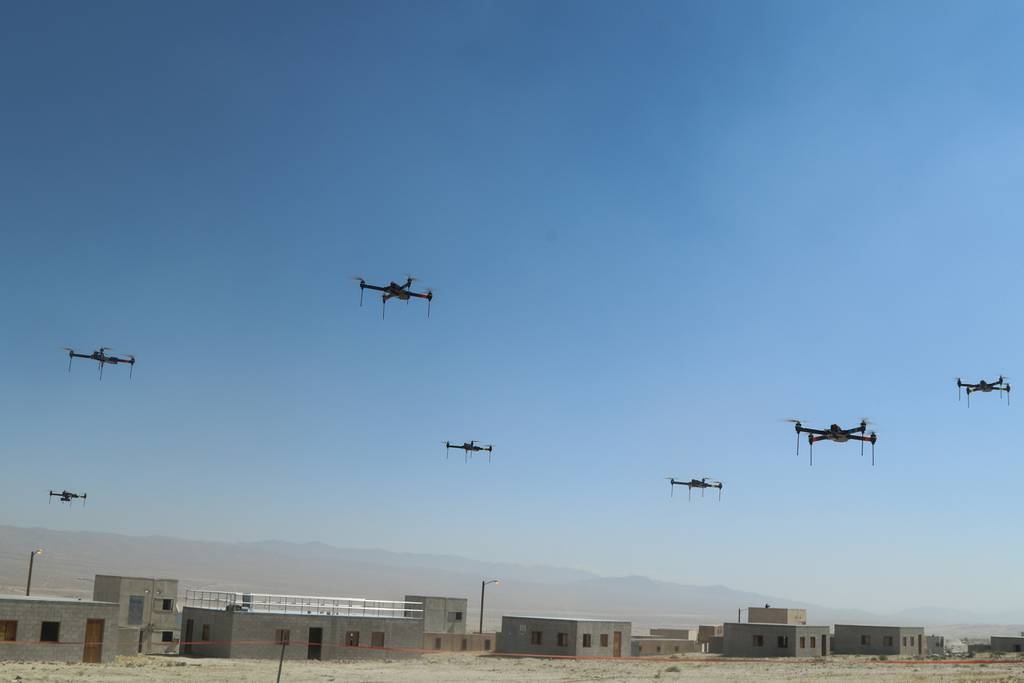 US Army to demo offensive drone swarms in next Project Convergence

WASHINGTON — The U.S. Army is preparing to demonstrate an offensive drone swarm capability at its next Project Convergence experimentation effort this fall, according to the service’s Rapid Capabilities and Critical Technologies Office.

The Army awarded a $14 million contract to BlueHalo in February to develop the capability over a 30-month period, the company announced in a Feb. 24 statement.

The Army moved out on a plan to prototype and demonstrate an offensive unmanned aircraft systems swarm capability in March 2021, Stan Darbro, the RCCTO’s deputy director, told Defense News in a March 1 statement.

The swarm capability is intended to be low-cost and will have the ability to identify and engage threats with the use of a single controller, he said.

The capability will be demonstrated “as a proof of concept” at Project Convergence 2022, which will take place this fall. Project Convergence is a campaign of learning to evaluate how the Army will fight with modernized equipment and advanced capabilities. The event began in 2020 and has continued on as an annual event at Yuma Proving Ground, Arizona.

“This is a standalone contract with BlueHalo and it is being executed through the RCCTO’s Rapid Acquisition Prototyping Project Office (RAPPO),” Darbro added.

BlueHalo is taking its company-wide expertise and resources to deliver “artificial intelligence [and] machine learning swarm logic capabilities, communications systems and evolving technologies within an operationally driven system-of-systems” to “provide the warfighter with improved mission efficiency, sensor performance and a reduction in cognitive workload,” the company said in a statement.

While the RCCTO effort focuses on offensive use of a drone swarm, the military services and industry are also concentrated on countering swarms of enemy drones.

The Army, for instance, is working on developing and integrating high-power microwave capability to destroy small drone threats, with plans to spend more than $50 million in fiscal 2022 on the effort while also working jointly across the services to establish an enduring architecture of solutions to address the threat.

The Army is also planning to field an HPM capability to destroy drone swarms as part of its Indirect Fires Protection Capability system that will defend fixed sites against drones, cruise missiles, rockets, artillery and mortars. The service is developing the technology with the Air Force, which is in charge of the research and development work. The Army is supplying the funding to build prototypes. Known as THOR — or Tactical High Power Operational Responder — the weapon was demonstrated at Kirtland Air Force Base, New Mexico, in February 2021. The Army plans to conduct field testing as early as FY24.

Industry is also moving out on solutions. For example, General Dynamics Land Systems and venture capital-backed startup Epirus announced they were teaming up to integrate a counter-drone swarm system on combat vehicles in October 2021.

Jen Judson is an award-winning journalist covering land warfare for Defense News. She has also worked for Politico and Inside Defense. She holds a Master of Science in journalism from Boston University and a Bachelor of Arts from Kenyon College.